As most girls in Hawaii, I have my own Hawaiian jewelry collection. I bought my first ring in the 7th grade, with money from my own savings. Santa brought me earrings one Christmas, and my aunty gave me a pendant on another. I got my ring guards later, and Grandma surprised me with a bracelet for my high school graduation.

Whenever my friends and I went outside of Hawaii, we were easily identified as the “Hawaiian” girls. Besides our Pidgin accent, people would recognize our jewelry and immediately ask if we were from Hawaii. It was a great “bonding” experience, and we would get annoyed when “non-locals” would buy the jewelry

Now that I’m older and (a little) more mature, I’m not annoyed by people who want to buy Hawaiian jewelry, and instead take it as a compliment that they appreciate and want something “Hawaiian.” Yesterday my friends Ryuji and Kinue came to Hawaii from Japan as they do every year, and this time their shopping mission was to look for Hawaiian jewelry.

Since I have only bought jewelry in Hilo, I asked my friends at the office for advice on where to go in Honolulu. We looked through over five pages of store listings in the yellow pages, and compiled a short list of stores to look at.

Ryuji and Kinue went to look at DFS’ selection early yesterday afternoon. Not familiar on what to really look for, they just priced a few items that caught their eye, knowing that they could easily return again. 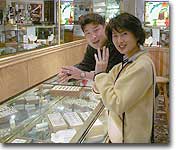 After I finished working yesterday, we all went to Philip Rickard at the Hyatt. They had a great selection of white, yellow, pink and green gold creations, and the salesgirl there was very helpful, patient and spoke immaculate Japanese. Although a little pricey, the craftsmanship was beautiful. Kin-chan had her heart set on buying something in a white gold, flower design. Ryuji also thought the rings were “kakoii,” or cool! We took home a merchandise catalog, and we liked that the store was also conveniently located near Ryuji and Kinue’s hotel.

This morning we went to Maui Divers. We opted not to take the tour, and the guide showed us to the second floor where they had a small selection of Hawaiian jewelry. We left with a phone number that Ryuji and Kinue could call if they wanted a Maui Divers shuttle to bring them back to the store. 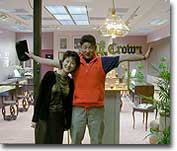 Harder to find than DFS, Hyatt Shops or Maui Divers, Gold Crown is located on the first floor of the Pan American Building, across from Daiei. Ryuji, Kinue and I immediately like the owner there. She had a wonderful selection of different styles, and was very accommodating in terms of finding something that would make Ryuji and Kinue happy. With prices comparable to Philip Rickard, we were a little hesitant to commit today, but it was definitely the best place we saw so far! 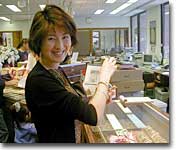 Although a little tired, we decided to go up to the sixth floor, to Classic Heirloom Creations. It was a lot more crowded than the other stores, and we found out why-their prices are so reasonable! I guess when it comes down to it, cost is often a deciding factor, and Ryuji and Kinue would be able to buy two rings and a bracelet for the cost of just one ring at another store! So, they did! They man who helped us was very helpful and patient, and promised to have the jewelry ready to be picked up before Ryuji and Kinue go home next Sunday.