Socializing is as important as meetings in the Japanese business world. Many times, ideas are born during these after-work hours-in ramen houses, Roppongi bars and izakaya restaurants. Trust and camaraderie are also developed, enhancing the success of each relationship.

In a young company like PacRim, with girls like me who would rather go shopping, spending nights in a smoky, dark bar with drunken Japanese men is the last thing we want to do. However, work is work, and we try to do what’s best towards building healthy working relationships. Luckily, our Japanese business partners treat us well, and avoid places that may make us uncomfortable.

Last night we had a dinner scheduled with the producers of Chikyu no Arukikata. But, instead of shabu shabu or tempura, we went to TOKYO DISNEYLAND! 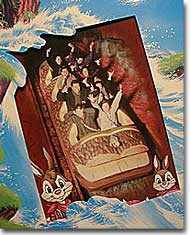 Something like this is almost unheard of in the Japanese society. I couldn’t believe it myself. Can you imagine three young women from Hawaii riding Splash Mountain with three businessmen from Japan? I even have a picture to prove it!

It was a strange, yet delightful experience for me. For an American girl raised with family vacations in the summer and dinners every night with mom and dad, it’s hard to understand the Japanese business way. It’s hard to believe that many trips are taken with the company rather than the family, and that many times late hours at work translates into no time at home with the kids.

Last night we all had a wonderful time. Kakiuchi-san’s wife and daughter came along. Yanagisawa-san hadn’t been there in more than 15 years, and for Hashimoto-san, it was only his second time. It was pure, family-like fun.

I was the veteran, having been there 6 or 7 times already, so I, the gaijin, led the way.

We took on the Big 3-Splash Mountain, Big Thunder Mountain Railroad and Space Mountain. We oohed and aahed at the Electrical Parade, took in the fireworks and shopped `til we dropped. We bought glowing necklaces, took pictures, talked and laughed our way from Fantasy Land to Tomorrow Land. In other words, we had a blast.

For three hours, we forgot all about our tired bodies, sore feet and Japanese business manner. It could be Disneyland’s “magic,” but I’d like to think that we brought a part of our Hawaii lifestyle to our Japanese business relationships. I smiled as I heard Yanagisawa-san and Hashimoto-san comment on how beautiful Disneyland looked all lit up. And, I think they took more pictures than I did.

The Japanese guys had just as much fun as we did, and I wonder if they’d ever do something like this if it weren’t for us. They can blame me-I don’t mind at all. Actually, I’d be happy to take credit for that fabulous night at the Magic Kingdom. It was a unique experience in the Japanese business world. And, there was no beer, either.

I hope that Yanagisawa-san doesn’t wait 15 more years to go to Disneyland. I hope he makes that trip again soon-with his wife.