The JET Program is all it’s cracked up to be. Just ask anyone who’s experienced it. JETAA, or Japan Exchange & Teaching Alumni Association, really should stand for “JET Addicts Anonymous.” The people in JETAA (myself included) have all completed our terms in the JET Program, and are crazy about Japan. All we do is talk about Japan. We sing Japanese songs at karaoke, we speak Japanese to each other, and we make the “peace” sign when taking pictures. Our affinity with Japan is very true and very much shared.

Most of us have only known each other through the JET Program. We have either met on the airplane to Japan, at orientations and conferences, or through friends. The longest JET friendship I have is just over 3 years, relatively short for a Hilo girl with friends since kindergarten! But my JET friends are among the best ever.

Last Saturday, Natalie left for flight attendant training in Minnesota. As always, the troops were rallied, and we sent her off in true JET style. We went to Ocean Club on Tuesday, to karaoke on Thursday, and to the airport on Saturday.

At Ocean Club, we planned Thursday’s karaoke night and invited Nat’s college friends who were there. We weren’t insulted when they immediately replied, “No Japanese songs!” And of course, they weren’t there at Karaoke Hut on Thursday night.

It would have been weird if they were.

It’s hard to explain why we’re all so close, and how we’ve remained good friends even after our JET experience. In some ways, it’s like the Hawaii Club at a mainland college, where just being in the company of other people from Hawaii helps to lessen the pains of homesickness. In other ways it’s like a sorority where no one else knows the secrets that the sisters share and don’t reveal. And in a strange way, it’s almost like a religion, since we all revere JET and will devote time towards preaching our faith to others wanting to believe. 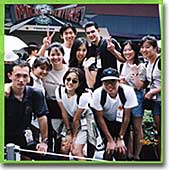 In Japan, we’d travel hours just to spend the weekends together. In my region, there was Nat in Saitama, Victor in Ibaraki, Robert in Tochigi and Rik in Tokyo. We are identified by the prefecture we lived in, and the circle keeps growing post-JET. Until I came home to Hawaii, I never knew of Jill from Yamanashi, Chris from Shiga or Ross from Saga. And of the newest group that left this summer, I still correspond with, and live vicariously through Leina in Hokkaido, Jamie in Yamaguchi and Keala in Saitama. From what I can see, they will all become members of JET Addicts Anonymous.

Maybe it’s because we share an experience so incredible, but get a bunch of JETAAs together, and we’ll never stop talking. There’s so much to say, and so much to reminisce about, that we hardly hear the same story twice. 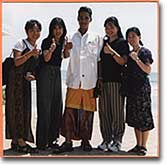 Have you ever talked to a friend after a fabulous week’s vacation, and wished they would just stop talking? That’s how it must be for our friends and family. We realize this, and try to keep our JETALK to a minimum around them. Inside our heads however, we compare almost anything to our experiences in Japan. So many times I want to start my sentences with, “But in Japan…”

There is no way to describe the JET experience. But the next time you see a group of otherwise local-looking people talking Japanese, acting Japanese, and basically being Japanese, look closely and you may see me.

By the way, I’m Susan from Gunma.

It’s JET recruiting time again! There will be a Q & A Session on Monday, October 25, 1999 from 12:00 – 2:00 PM at the UH-Manoa Campus Center, and from 3:00 – 4:30 PM at Hawaii Pacific University. JETAA will be there to talk with and answer questions of prospective JETs. Or, write to: Embassy of Japan, Office of the JET Program, 2520 Massachusetts Ave. NW, Washington DC 20008 for more information and an application form.

Established in 1987, the Japan Exchange & Teaching (JET) Program is one of the largest-scaled exchange programs, with 34 participating countries and over 5,500 participants. Conducted by local governments in cooperation with the Ministries of Foreign Affairs, Education and Home Affairs, and the Council of Local Authorities for International Relations (CLAIR), participants are placed in host institutions throughout Japan, with the aim of enhancing foreign language education and cultural understanding.