Hawaii was shaken by a terrible tragedy yesterday when Byran Uyesugi, a seemingly “normal” local guy, shot and killed seven of his colleagues at work, in Hawaii’s worst mass slaying.

I first heard about the tragedy on my way to work, and tuned the radio to KSSK all day. People from across the state called in, each with their own opinions and ways of coping with, and trying to understand the tragic situation. Most were in utter disbelief that such a dreadful crime occurred in their “paradise.” The prevailing issue was trying to figure out what drove this otherwise “normal” man to commit such a terrible thing. The real truth is that no one may ever know. 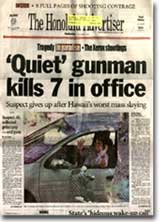 Besides the sympathy I feel towards the families and friends of the seven victims, what is strangely different about this case for me is that I feel the same emotions for Hiroyuki Uyesugi, the gunman’s father.

The elder Uyesugi didn’t even try to convince his son to surrender to the police. His face was sad and ashamed as he said, “I am gonna bring him another gun so he can shoot himself. I would tell him to shoot himself.”

In contrast to usual “no comment” answers from those close to the accused, the elder Uyesugi’s obvious sorrow is distressing, especially in a place like Hawaii where familial ties run so strong. I know that he will live the rest of his life with shame that a man like himself shouldn’t have to bear. It makes me wonder just how much we really know-

Sixty-seven years ago, in 1932, there was another tragedy in Hawaii. An estranged man killed his ex-girlfriend, drove her body to Volcano, and threw her into Halemaumau Crater before jumping in after her. It was a murder-suicide that ended in the tragic loss of two lives and left a once-beautiful landmark scarred with death. No one knew how to restore the beauty to the Volcano, and plans were made to blast the crater walls so the falling rocks would bury the bodies and help people forget the tragedy that occurred.

I never knew about this crime until I was in the 6th grade, fifty-something years later. The only reason a crime committed so long ago would be so important to me is that my Ojiichan, who had passed away a few years before, was the man who rescued the bodies from Halemaumau.

As a kid, I never knew what the trophy at his house was for, and I never asked. Later, I asked my dad why no one told me about Ojiichan‘s heroic rescue. Dad’s simple answer was, “That isn’t why Ojiichan did it, Sue. Ojiichan lived his life not for money, recognition, and heroism, but for doing what’s right.”

To fulfill my own curiosity, I spent hours in the library researching the story that I was never told. I found that Ojiichan was on the front page of the newspaper for weeks, and I compiled a scrapbook that I shared with my aunties, uncles and cousins. No one seemed to know the whole story, and were fascinated by Ojiichan‘s generosity and unselfishness.

Yesterday’s tragedy reminded me of Ojiichan‘s story-Not only in the sense that we sometimes don’t really know about our own family, but that when tragedies occur, heroes emerge. And, despite the increase of vicious crimes in our world, I still believe that heroism prevails in most people.