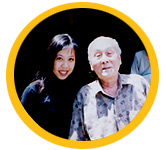 Last Friday, I paid my respects to Lee and Joy, and helped them to say good-bye to their grandpa.It’s always hard to watch others grieve, and it’s never easy to sit in the chapel and listen to a eulogy without crying. Still, funerals are an important way of reminding me that I need to be less selfish and more thankful of the relationships I have in my life now.

It reminds me of the time it was my Ojiichan‘s passing that everyone came to mourn, and the time when I prayed for a childhood friend.I always found strength in the company of my family and friends.It was much harder for me when Aunty Sachiko passed away while I was in Japan, and my physical absence almost led me to believe that nothing ever happened.

I had the same sense of no closure a year ago, when I personally struggled to accept that my teacher, friend, and mentor, Kuriki Sensei, had died.For a long time, I couldn’t stop thinking about him, and wrote the following essay to help me remember him.I found it filed in my computer archives, dated August 11, 1999:

I Used to Have a Japanese Greeting on My Answering Machine

I just changed my answering machine greeting last night.Up until now, it was a Hi-This-is-Susan-leave-your-message-after-the-beep thing followed by a Tadaima-rusuni-shiteorimasuga-pi-to-nattara-messeji-o-nokoshite-kudasai thing.Now it’s just in English.

Kuriki Sensei used to call me at all times of the day.Sometimes I would come home from work, and there would be three messages from him, worried where I was, and why I wasn’t answering the phone.Every time I’d call him back, remind him that I worked all day, and that there was a time difference.He seemed to understand, but of course, forgot with the next urge to call me.But it didn’t bother me at all.

When I was in Japan, Kuriki Sensei was my “sumie” teacher.A self-taught master, he was 86 when I first met him.A rare eye disease was slowly robbing his vision, but he still painted better than any sighted person could.I would drive for four hours every other Saturday to see him, paint, and just spend time with him.He quickly became my hanai grandpa in Japan.

Since he had a hard time walking and never drove, I would take him shopping, and he’d always throw in an extra something into the basket for me.Saturdays together were pretty routine.Usually, he would order tamago don for lunch and have it delivered to his house.There always was grapefruit in the fridge, and we ate that all the time.And, he was constantly taking pictures.

Once I went to see a temple whose ceiling he had painted.Other weekends we exhibited our work at local shopping centers and community centers.My last Saturday, I danced Nihon buyo for him.

Our last good-bye was especially teary and hard, but I was happy with what we shared, and we promised to call often.He was the one who insisted that I add that Japanese message to my answering machine greeting.Of course I obliged, but got teased by my friends, “Susan, you’re not in Japan anymore!”I even tried to explain to Kuriki Sensei that an answering machine in Hawaii is the same as one in Japan just leave your message after the beep!I should have known that I’d never win that argument.

So when Lori called so say that Kuriki Sensei had passed away, I could-have-should-have-would-have changed my greeting.But I didn’t.I couldn’t.

A six-month overdue answering machine message change could never indicate how much I missed his “Where are you, Susan?” messages, or all the memories we shared, but it was my way of saying good-bye to a wonderful man.